Lotus House heads back to Miami Commission on July 6 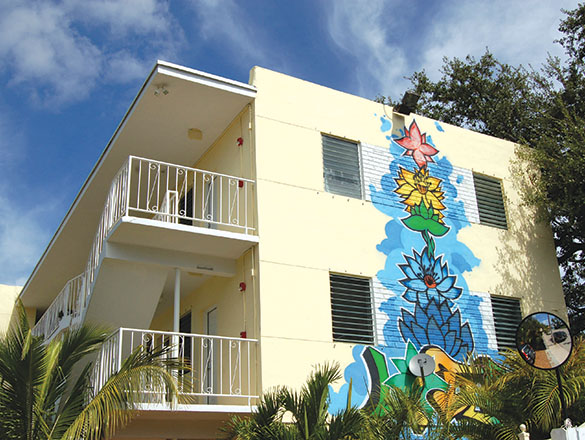 Lotus House, the Overtown-based facility that provides a haven for women in distress and their children, is a step closer to getting approval of an expansion project thanks to a vote by the Miami City Commission.

The city approved two resolutions related to the facility at Thursday’s meeting. Lotus House staff and residents erupted in cheer at City Hall once the unanimous votes were announced.

“It was a huge relief for us, and an important milestone,” said Constance Collins, the president and CEO of Lotus House. But she also recognizes that there is more work to be done.

“We still have two hearings to go,” she said.

Collins and dozens of residents pack commission chambers each time to make their case. They have attended at least four meetings, going before assorted commission, advisory and zoning boards as part of a year-long process to get city approval to expand Lotus House so they can provide more services for homeless women and children.

She expects to be back at City Hall on July 6, when the City Commission will hear an application to formally create Lotus Village, the given name for the collection of apartment-style buildings across a number of parcels. She hopes the project will get the green light on July 14.

Regardless, Collins is determined and undeterred from seeing through the dream of expansion.

“The only reason we have that additional hearing is because we are a shelter. There’s an extra hearing. We’ve had five different public hearings,” she said.

Meanwhile, Collins is spearheading a $25 million renovation campaign to build or revitalize properties and plumbing.

In its 10th year, Lotus House is the only shelter in Miami that caters housing, mental and physical health services and training exclusively for women and children. The existing buildings provide space for more than 185 women, youth and children per day, far less than the demand. Officials say they turn away at least 2,000 a year.

While on site, the women receive more than food and shelter. They get counseling, job readiness training and employment coaching. Once they leave, many of them return to work on staff.

Georgette Madison is one of the women fortunate to have gotten a space. She lived at Lotus House with her young daughter, Alana, for a year in 2013. That was time to stabilize her life after fleeing from a domestic dispute with her brother at their Little Haiti home. “I didn’t feel safe there anymore,” Madison said. She didn’t know about the shelter until she noticed a “big pink moving truck” in the neighborhood. She looked up the name on the internet.

“I wanted a different type of shelter because I knew I didn’t want to expose my daughter to some things,” Madison said. “[Lotus House] offered a lot different programs, like yoga and meditation.”

Collins said the funds will help repair or rebuild crumbling, older buildings, which are not “well-suited for the additional support program that we offer.” She said the new Lotus Village will have a children’s wellness center, and a child care center that also will have space for up to 25 local children.

“So many of the children have been exposed to violence and they need to heal,” Collins said.

Though the approval process has taken a while, Lotus House administrators received support from county- and state-elected and appointed officials. Also, there is no opposition from area residents and business owners. The Overtown Advisory Board gave its blessing, as did several venerable churches, including the Historic Mt. Zion Baptist, St. John’s Institutional Greater Bethel AME, and the Historic St. Agnes Episcopal Church.

Collins said that in 10 years, they’ve proven themselves to be good neighbors. “We eat at the restaurants, bank here. Those who live here patronize the businesses,” she said. “When you are a support system for your own neighborhood it makes a difference.”

The nearest neighbors even signed on board to speak on behalf of the project.

“I’m their new advocate,” said Anitrece Joy McKinness-Jackson, the next door neighbor. She has attended most of the meetings and plans on being with Collins and the ladies on July 6.

Lotus, McKinness-Jackson said, provides needed services in Overtown. “They’re getting educated, getting jobs. They have a lot of stories on where they’re helping people,” she said.