Mentoring Matters: Lotus House Founder Helps Homeless People Get Back On Their Feet, Pay It Forward 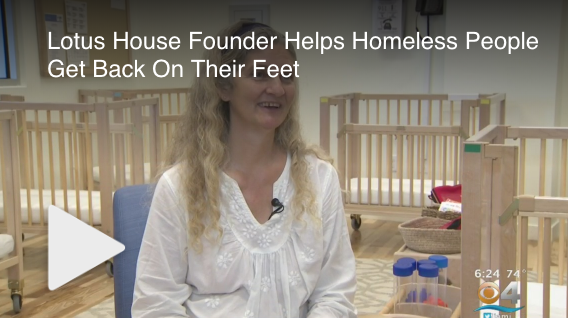 Mentoring Matters: Lotus House Founder Helps Homeless People Get Back On Their Feet, Pay It Forward

MIAMI (CBSMiami) – The paint has just dried on the all-new Lotus Village.

It’s a brand new state of the art shelter facility – a sanctuary – in the middle of Overtown, with in-house support services for women and children who are homeless.

“We had very humble beginnings, we were in one aging apt building we renovated and housed 34 women in the first year,” Collins said.

The new modern space was just completed and provides a host of services that will help residents transition out of homelessness.

“We’re sitting in Lotus Village which is a comprehensive homeless services facility with the capacity to shelter 500 women and children nightly,” she explained.

Juliana Lima is a Lotus House alumni. She was in the original building back in 2014- with her then 8-year-old daughter who was abused by her father.

“We’re sitting here in the Children’s Wellness Center which has six classrooms for newborns to 3-4-year-olds, a play therapy office to help our women and children heal,” Constance Collins said.

Constance gave CBS4’s Lisa Petrillo a tour of the new spaces, which include everything from the wellness center to the educational center – where women learn how to use computers art rooms, playrooms, a yoga room, counseling rooms and even a fully operational healing hands beauty salon.

“It’s about feeling human again. You survived on the streets where you were invisible. Now, you have the chance to feel human again,” Collins said, showing off the beauty salon.

Constance says there’s no real time limit as to how long these families stay at Lotus House -but the average stay is about 6 months.

“No one heals in a rush so we’re here to make sure that all the support systems you need are in place before you make it that your transition will be a successful one,” she explained.

Lotus House receives government funding and grants but it relies heavily on individual donations, back in February rapper Drake donated 50 thousand dollars to the organization, as part of his single he released called God’s Plan.

“There was such a great sense of excitement in the house when he arrived,” she explained. “We have to serve over 1/2 million meals a year, $10 dollars buys three meals, so imagine $50 thousand!”

One-third of the staff are alumni, serving as mentors for the women and children arriving.

For Juliana, who’s now fully independent, the place means everything.

Petrillo asked Julian what one word would she uses to describe Lotus House.

“Amazing, just that world ‘amazing’. Everything is amazing here.” She said.

The official Lotus Village ribbon cutting is on April 19th, followed by a gala fundraiser at Soho studios that evening (which Lisa Petrillo will Emcee).

If you are a mentor and would like to share your story with us, please email us at mentoringmatters@cbs.com.