Donors built Miami a $25 million shelter for women and kids. Is it the nation’s best? 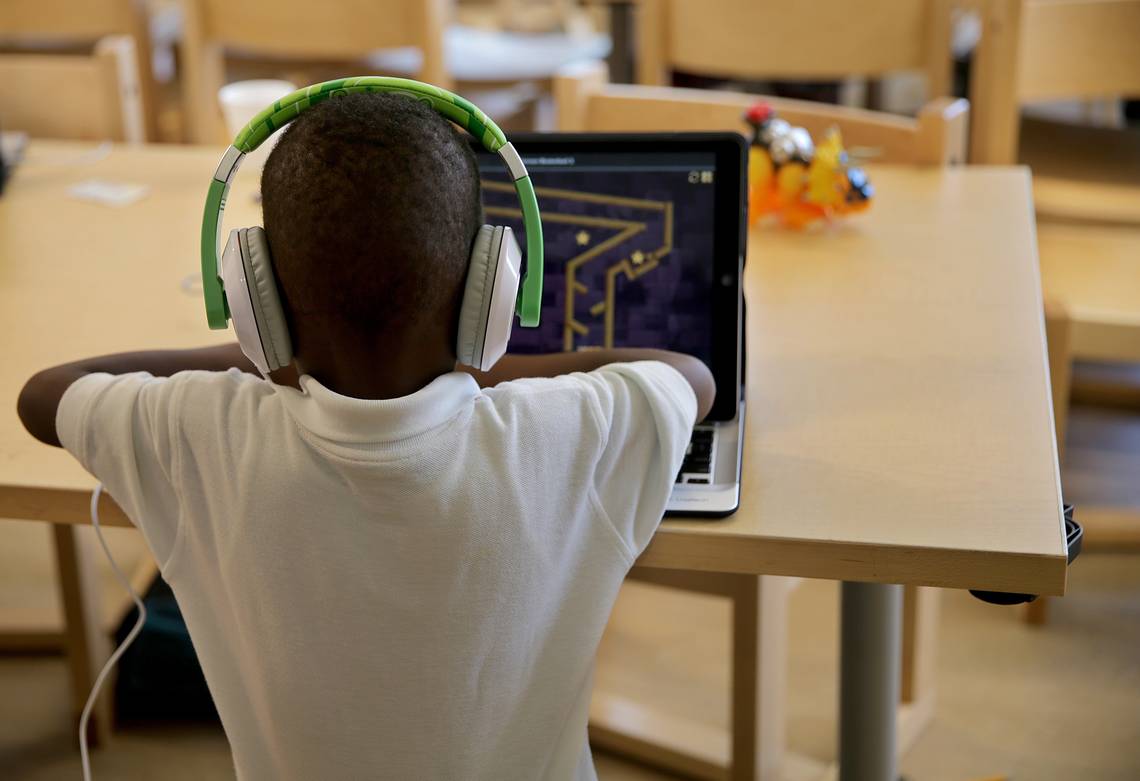 Working on improvisation and a virtual shoestring, Constance Collins and her staff, volunteers and backers at the Lotus House shelter in Overtown quietly rescued well over 2,000 women and children from the perils and trauma of homelessness in the last decade.

Now, with a new, state-of-the-art $25 million building — equipped with a children’s therapeutic center, a full medical clinic, in-house day care, a yoga studio, a Zen garden, a gleaming professional kitchen where women will train as line cooks and chefs, and cozy beds for 490 “guests” — there is no telling how much more they can do.

The renamed, newly finished Lotus Village, to be formally dedicated Thursday morning, may well represent an unprecedented model for comprehensively healing the wounds of homelessness and setting its most vulnerable victims on a path to stable, productive lives, backers say.

A child plays at a computer in one of the spaces dedicated to kids at the new Lotus House shelter for homeless women and children in Overtown. The $25 million-project, which opens Thursday, will house a medical clinic, Yoga studio, a Zen garden and accommodate 490 women and children.
Pedro Portal pportal@miamiherald.com

The key to ending the cycle, Collins realized: focusing on salving the trauma suffered by homeless children, who can often grow up to become homeless adults.

And while the setting and the suite of services and programs the shelter will provide won’t come cheap, the cost of the new building — the only shelter in Miami-Dade County dedicated exclusively to homeless women and children — is being fully covered by donors without any public money. Some services and programs have government support.

But Lotus Village’s chief benefactor, developer and art collector Martin Margulies, has just unveiled a new $19 million gift to the shelter project, bringing his total support to $44 million. There are millions more in gifts from Miami Heat owner and Carnival Cruise chairman Micky Arison and his wife, Madeleine, and the families of auto mogul Normal Braman and Royal Caribbean chairman Richard Fain, among others.

“Gosh, now that it’s here, it’s hard to find the words to express a dream come true for so many women and children, generations of whom will come through this place,” Collins said as she and Margulies led visitors on a tour of the five-story building, which occupies a full block in the heart of Overtown.

Residents pass by a hallway at the new Lotus House shelter for homeless women and children in Overtown. The $25 million project, which will accommodate 490 women and children, will open on Thursday.
Pedro Portal pportal@miamiherald.com

Like proud parents, Collins and Margulies pointed out the museum-quality art in the lobby and common areas, on loan from Margulies’ lauded collection, the massage therapy table in the yoga room, the Apple iMacs in the education center, the design-ery hair salon that’s staffed by volunteers, and the well-stocked art and activity lab, already decorated with drawings and paintings done by resident children.

Those homey details may sound granola, or as frills. But Collins and Margulies say they’re actually integral to Lotus Village’s approach, developed during years of experimentation, trial and tribulation, to what has been a nearly intractable problem.

“It offers dignity,” Collins said. “It’s an important part of healing. One of the goals is to make the women and children feel like a part of our community. That’s so important when you have survived by being invisible.”

Every room and detail, she and Margulies said, was designed with the goal of making children feel at home and cherished.

Joked Margulies, who became wealthy building luxury condos and oversaw every phase of Lotus Village’s development, from planning to design and construction: “She wanted nothing but the best.”

And it shows throughout the building, by Coral Gables architects Behar Font and Partners. There are light-filled patios and common rooms, furnishings and flooring in warm wood, even mod chandeliers in the expansive dining room and in the hair salon that were donated by a local restaurateur. Every part of the building is fully accessible to the disabled.

Staff, women and children have been moving in since New Year’s Eve, gradually filling its common spaces and floors with life and activity day and night. By the time the shelter fills its fifth floor, nearly done but still awaiting a certificate of occupancy, Lotus Village will have double the capacity of the old facility it replaced — a collection of rundown or derelict small apartment buildings that Collins had cobbled together and rehabbed over the years.

The old Lotus House had charm: a garden, therapy cats wandering about, colorful paint jobs and art. But Collins said she was weary of turning away women because it was always full to bursting. Collins gave up her career as CFO of a real estate investment firm to start Lotus House when she realized there was no shelter in Miami-Dade dedicated to caring for homeless women and children. She bought the first two buildings with her own money and enlisted a squadron of volunteers, including architects and zoning lawyers working for free.

Though other shelters and programs in the county do house and provide services to women and kids, she said, they don’t necessarily get the particular, tailored care they require because their needs are often different from those of homeless adult men.

The holistic design of Lotus Village, she and Margulies believe, is unique in the nation and can serve as a prototype for facilities in other cities. At the Micky and Madeleine Arison Children’s Center, homeless kids will be assessed and receive therapy. Florida International University researchers will study the programs and publish findings.

Other collaborators include the United Way, the tax-funded Children’s Trust and Miami-Dade Public Schools. The Jessie Trice Community Health System will operate the soon-to-open clinic, which will also see Overtown residents.

“It’s a brand-new house for us, and we are learning how to use this platform as a place of sanctuary and healing,” Collins said.

In typically blunt fashion, Margulies added: “I think it’s the finest facility for the homeless in the country.”

The model, developed at the old Lotus Village, has proven unusually successful. The average stay is six months, though that can stretch to a year or longer for residents with special needs, such as women undergoing cancer treatment — a common circumstance, Collins said.

Some 90 percent of the 2,600 women and children who have gone through the program have stayed off the streets, Collins said. Alumni also make up a third of the current staff of 75, she said.

And the hundreds of volunteers who have come through have left the richer for having done so, Collins said. She herself is no exception, she added.

“I think it’s enriching on both sides,” Collins said. “It’s a beautiful experience.”