No need to go to New York. The season’s hottest pop art is in Wynwood 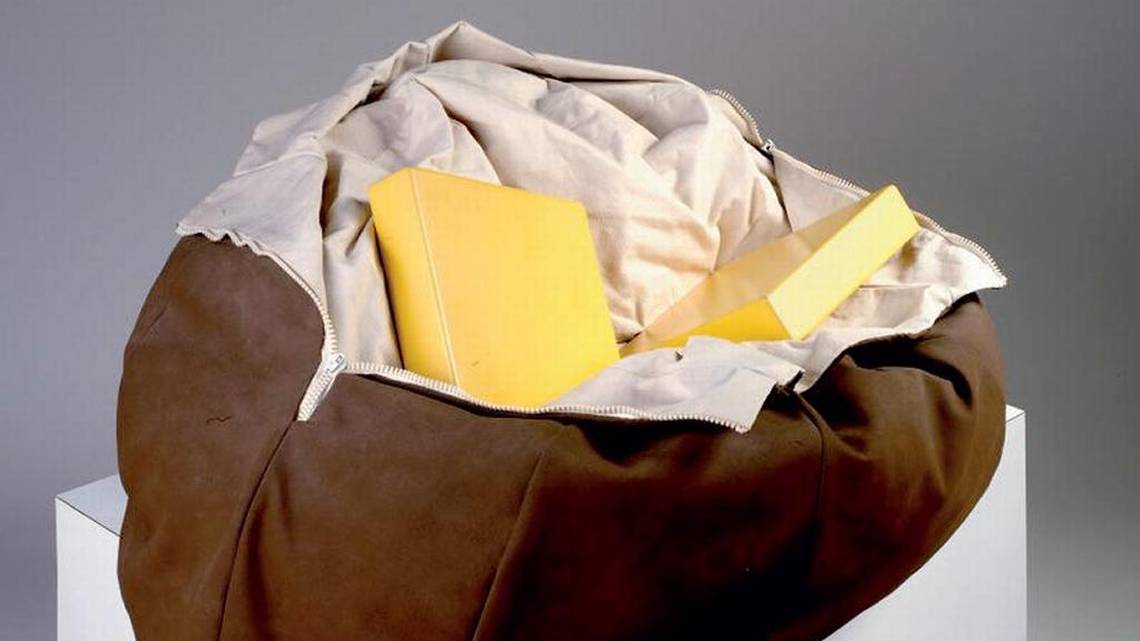 Like a perfect haiku, the Pop Art exhibit at the Margulies Collection says a lot with so little.

The Japanese poetry style conveys abundant meaning in just 17 syllables. Similarly, collection founder Martin Z. Margulies uses just 17 works — if you view the three images of “The American Indian” by Andy Warhol as a triptych instead of individually — to chronicle the history of Pop Art.

While much of the work looks familiar and many of the artists are household names, few collections outside of the Museum of Modern Art or the Whitney Museum of American Art in New York can offer anything remotely similar. The majority of the works in the show were created in the 1960s, when the movement first emerged, and includes seminal works by the pillars of pop. On display through Dec. 10, the show features work by Warhol, Jasper Johns, Roy Lichtenstein, Claes Oldenburg, George Segal, James Rosenquist and Tom Wesselmann.

“This year, because of the magnitude of what we’ve done,” Margulies said, “it’s the best show that we’ve ever done.” That’s saying a lot, given that he has been collecting for roughly half a century and has amassed a collection of some 4,000 works that fill his Key Biscayne home and the exhibition space at his 45,000-square-foot warehouse in the Wynwood Arts District of Miami. The exhibit features all works from his private collection installed in his home.

“We wouldn’t have done it,” he said, “except that we’re having a charitable gala for the Lotus House homeless shelter for women and children.”

A staunch advocate for the Overtown-based shelter run by his former wife, Constance Collins, Margulies has contributed millions of dollars to Lotus House. The warehouse website also notes “all proceeds benefit the Lotus House, a unique residential facility with wrap-around support services for women, youth and children experiencing homelessness in our community.”

The Pop Art exhibit fills the entry salon in the warehouse. Visitors are free to roam the remaining galleries, which include monumental works by major figures in contemporary art, including Anselm Kiefer, Olafur Eliasson and Isamu Noguchi. The gallery immediately adjacent to the Pop Art show is a wonderment of weighty work, such as Willem de Kooning’s “Seated Woman,” a massive 8 x 12-foot bronze that appears as if the artist slathered paint from a series of brushstrokes into the abstract form of a woman.

The de Kooning sculpture complements Roy Lichtenstein’s “Brush Strokes” painting from 1966 that is part of the Pop Art show. Margulies paired that painting with Lichtenstein’s earlier work, “Hot Dog,” created in 1963. In his art-imitates-life approach, Lichtenstein painted them to resemble commercial advertisements. To achieve that effect, he used Ben-Day dots, a technique dating to the 19th century and named after illustrator Benjamin Henry Day Jr.

“Up until 1964, he did these Ben-Day dots that you use in printing techniques, by hand,” Margulies said. “So, it was blurry. This is 1963. These are very rare. In 1964 he started doing it in stencil, like the ‘Brush Stroke.’ At that point, he probably had assistants helping him.”

In addition to the two Ben-Day dot paintings, the show includes three of Lichtenstein’s sculptures. Eye-catching and joyful in bold primary colors, the sculptures make masterful use of negative space. “He was just a brilliant guy,” Margulies said, pointing to the smallest of the sculptures, “Cup and Saucer,” which stands just 30 inches tall. “How do you take an abstract concept of steam coming out of a cup and transpose it into a solid mass like this – and make it look good?”

The artist’s early sculptures from the 1970s and 1980s used stripes instead of dots to convey a certain airiness. His Ben-Day dot sculptures came later. Today those sculptures sell for millions of dollars. One Ben-Day dot sculpture, “Woman: Sunlight, Moonlight,” sold at auction last May for more than $10 million. That sculpture is not featured in the exhibition. However, another edition of one that is, Lichtenstein’s “Expressionist Head,” sold for $3 million at Christie’s New York, also in May.

Margulies also owns Lichtenstein’s “Picture and Pitcher,” which is one of the highlights of the show. It depicts a water pitcher that diffracts the image of a picture frame in the background. He bought the sculpture sight unseen. According to collection curator Katherine Hinds, it is the only work in the entire collection Margulies bought that way, and soley on the advice of Ivan Karp, an art dealer who popularized Pop and was known as savant in the art world. Had he waited for Karp to send an image of the artwork, it would have been sold by the time he opened his mail, Hinds said.

Hinds suggests starting an exhibition tour with the Jasper Johns painting, “0-9,” which he created in 1959 using encaustic or hot-wax paint, typically composed of beeswax, resin and pigment.

“In many ways, Jasper Johns was the bridge between abstract expressionism and the pop movement,” she said. While Johns depicts numbers – which fit into the Pop Art culture of elevating everyday objects – he also created the work by hand. “There’s the touch and the hand of the artist with the brushstroke,” she said, adding, “What I love about it is when we moved it here, there were drips that I hadn’t really observed before.”

She compared those chance drips to the solitary green tear drop that Lichtenstein deliberately added to his “Brush Stroke” painting. By contrast, Johns accidentally created drops due to an overabundance of paint on his brush.

This later work by Lichtenstein also highlighted mass production through its reliance on stencils rather than laboriously painting each Ben-Day dot by hand. Rather than stencils, Warhol used silkscreens to reproduce like images. He believed that the more an image is seen, the more recognizable, and in turn the more celebrated, it becomes.

In keeping with Warhol’s philosophy of repetition, the exhibit includes three of his 50 x 42-inch paintings of “The American Indian (Russell Means)” from 1976. Done in various shades of brown and tan, the individual paintings can easily be viewed as a triptych.

They portray Means in stereotypical Native American dress, his hair in twin braids. An activist and actor, Means was a member of the Oglala Lakota tribe. He participated in various protests to further the rights of his people, including an armed standoff at Wounded Knee and the takeover of Mount Rushmore, located on land sacred to the Lakotas. He also appeared in numerous movies, including “The Last of the Mohicans.” The three nearly identical portraits placed side by side reinforce the notion of Russell’s celebrity status.

Warhol was fascinated with the idea of celebrity and the culture of fame. “It’s because pictures of them become ubiquitous and repeated and repeated,” Hinds said. “He foresaw that at a time before what our society became today – celebrity based. He really saw that visual, ubiquitous, repeated image. That’s why I think that’s an important work.”

Warhol also saw how something as common as mass-marketed scrubbing pads, cereal or juice could become art. When Warhol first sent his assistant to a nearby grocery, he returned with distinctive, exotic kinds of boxes, said Hinds. “He said, no, go back and get the most ordinary thing that you can find. And regardless of your economic class, it’s immediately recognizable.”

“These boxes really hold the whole show together,” Hinds said. “This is Andy Warhol, and it’s a complete look at him.”

While Warhol originally stacked his boxes on the floor for collectors to gather as if from a factory floor, here they are placed on a shelf, away from wayward feet. Similarly, the Claes Oldenburg “Soft Baked Potato” installation from 1970 is encased in clear Plexiglas. Set at a child’s eye-level, the installation is sure to attract a lot of attention, even if people are admonished to look but don’t touch.

An ingenious work, the potato appears to be made from an unzipped beanbag that reveals a pillowy interior with two large pats of butter. “He made the hard concepts soft and the soft concepts hard,” Margulies said. “So, the butter patties are made out of wood.”

Tom Wesselmann also used wood to recreate a bar of soap in his “Bathtube Collage #6.” Famous for his busty blondes on the beach, Wesselmann took a minimalist approach with this work done in black, white and gray, the work incorporates a real toilet seat, a bar of soap made of wood, plumbing fixtures and even a tiled wall behind a black tub. A bathing woman can be identified simply by her full lips and left nipple.

A 16 ½ foot wide triptych by James Rosenquist plays counterpoint to Warhol’s three Russell Means portraits. Rosenquist, who died at his Florida studio earlier this year, was known for his surreal paintings that included industrial and commercial imagery. In the Margulies show, the triptych shows multiple tubes of lipstick, molten metal being poured from a crucible, and a polished fingernail that resembles a fountain pen nib. Here, Rosenquist repeats the tubular shape of the lipstick and modifies it in each of the three panels.

“The Rosenquist is so beautiful,” Hinds said. “He painted in three panels because when he was a commercial billboard painter they would only work on certain sections of the billboard at a time. He retained that through his work.”

George Segal also focused on one of the most recognized images of the era – that of the New York subway car. Created in 1968, the installation includes original subway car with three rattan seats and an old subway map, years before Massimo Vignelli updated it with a modernist streamlined version. In his book about the collection, Margulies explained that Segal tried for days to obtain a scrapped section of a subway car from the New York City surplus yard. Apparently, city employees lacked the authority to sell city property. But when he returned to the yard after-hours one day, an arrangement was reached with a wink and a nod – and the exchange of a few dollars.

Years later, in 1991, Segal recreated another iconic image – that of the “Depression Bread Line” – which is part of the Franklin Delano Roosevelt memorial in Washington, D.C. The sculpture depicts five men with sagging shoulders and hands jammed into their overcoat pockets. Segal placed himself in line and included four friends from the art world for the remaining models: then director of the Walker Art Center Martin Friedman, Daniel Burger of the Metropolitan Museum of Art, photographer Donald Lokuta, and former WPA artist Leon Bibel.

At 9-feet-tall, the men are larger than life, but emblematic of the pop movement. They memorialize something that we’ve all come to recognize through repeated exposure to the black-and-white photographs of Dorothea Lange and other Depression era images.

That holds true for each of the seven pop artists in the show. Their work emphasized repetition of the recognizable, from the everyday to the extraordinary. What they captured in paint and sculpture would later be memorialized as icons of their day, foretelling the future through their art.